Last week I received an advance copy of the latest addition to the Depeche Mode tribute collection – Rockabye Baby! Lullabye Renditions of Depeche Mode. When I was first contacted, I will admit I was skeptical, as I know some attempts at Baby-Rock albums have been rather cheesy and poorly executed. However, I am pleased to say that this release made me smile from the time I opened the package – coming from a person who’s only interested in ga-ga if there’s a “radio” or “lady” preceding it.

Description from website/packaging: “Just can’t get enough sleep? Babies are babies but why should it be that you get no peace. Rockabye Baby answers your prayer for a night of joyous silence. The next time your little one plans on being up all night, try spinning our lullaby renditions of these Depeche Mode favorites. It’s all the baby ever wanted and all they’ve ever needed.”

Tracklist:
Personal Jesus
Just Can’t Get Enough
Everything Counts
Policy of Truth
Strangelove
Walking In My Shoes
World In My Eyes
It’s No Good
Little 15
Stripped
People Are People
Enjoy The Silence 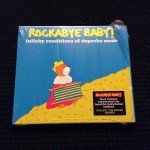 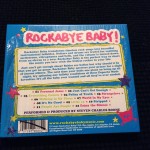 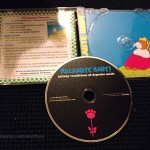 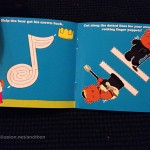 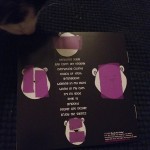 The packaging for this release is cleverly put together with several baby-inspired nods to classic Depeche Mode artwork. With the exception of the black, all the colors are bright neon punk colors. The cover features a teddy bear in the iconic crown and robe from Enjoy the Silence, carrying a deck chair up a grassy hill. When the CD is lifted out of the jewel case, the bear is now resting on the hilltop in said chair. The disk itself features a Violator paw print instead of a rose, and the back of the liner notes pays tribute to the cover of Songs of Faith of Devotion, with black and white teddy bear faces where the band would be. The liner notes are actually a miniature activity book, with an Enjoy the Silence bear maze to help him find his lost crown. The laugh-out-loud highlight is the Martin-bear and Dave-bear finger puppets, complete with c. 1986 leathers – hat, suspenders and zippered jacket.  There’s also a recipe sheet for “Personal Peasus.” Some people might think these references corny, but I find them quite clever. It shows an attention to detail and research that I can appreciate as a marketing professional, and that I think any expecting fan could get a giggle from.

The cleverness doesn’t stop with the packaging. Layers of percussion and guitars/keyboards are distilled into mellotrons, vibraphones and bells. This creates a sound that is best described as Depeche Mode – the music box (or glockenspeil). According to the package, “the volume is turned down from an eleven to a two”  and the second paragraph is full of Depeche puns (bonus points for amusing copywriting). The songs are pretty faithful, with the main melodies and some baselines and textures easily discernable. Occasionally there will be an odd spring, rattle or other strange sound effect that is a bit distracting, but they are likely there to add to the child-like feel and are lower in the mix than the primary melodies. To keep the melodies from getting to repetitive, some songs will change key or change element mid phrase, which can seem awkward to fans who have the usual patterns etched in their brains. However, the album executes it’s aim quite well throughout – each song featured is transformed into a twinkly, calming tune sure to soothe. It actually reminds me of the pleasant neighborhood sound track for Animal Crossing on GameCube (one of the best games ever).

“Walking in my Shoes” goes from dark epic to a whimsical dance (music box, complete with sad ballet dancer), while “Stripped” starts with the chirps of a summer night instead of an engine, and is softer than the original. Warning: You may get cavities listening to this album. If you thought “Just Can’t Get Enough” couldn’t get any more saccharine, you were wrong. It’s then followed by “Everything Counts,” which goes from cynical to sugar-coated (but somehow still enjoyable – Mart can write a good pop tune, afterall). “World in my Eyes” is a highly seductive song in lyrics and sound, so it’s actually awkward to hear it rendered in an innocent context.

Fans who take their Depeche Mode tastes too strictly probably won’t enjoy this CD much; it’s fun, light-hearted and doesn’t try too hard to be dramatic (obviously, for the concept). This is a CD for fans who are interested in unusual takes on old songs, or fans with babies (getting that addiction started early?) who are tired of the run of the mill nursery rhymes commonly sold in baby sections.  Visit their website to listen to samples of the Depeche Mode CD and their check out other releases. There are quite a few other lullaby albums on their site that I found amusing and well-done, including The Cure, Smashing Pumpkins and Nine Inch Nails.

While this CD is not the most epic and artistic tribute to Depeche, it is a must-have for hardcores that want a fun giggle, or want to get their little ones started on the good stuff early! The album is not a poorly-executed gimmick, and is meant for fans to truly enjoy along with their infants. From the iconic symbols on the packaging to the way the composer was able to simplify really complicated songs in a creative way, it is apparent that it was made with a lot of care and attention to detail in mind.

Review: “So Cruel” as recorded by Depeche Mode

To Ben or not to Ben, That is the Question