Opinion
November 21, 2009January 18, 2010 Amanda 0 Comments marketing, social media, twitter
Depeche Mode has long been at the forefront of technology from pioneering synthesizer pop, samples and out-of-the-box thinking (literally) to having one of the best official sites on the web. The Band were ahead of the game when they hosted one of the very first live chats between a band and their fans in the 90s. Their website was teaming with archival footage from gigs, music videos and TV shows long before anyone thought of YouTube. The release of 2001’s Exciter was preceded by 30-second teaser clips and in-studio band greetings uploaded to the site before Tom insisted on being everybody’s friend.

It’s clear that the team behind Depeche Mode have been continually aware of the growing role of the Internet, having established a presence on all the major social media outlets during 2005’s promotion for Playing the Angel. They established a solid social media foundation with utilization of MySpace video premieres, news updates on Twitter and Facebook, in-studio clips on YouTube and maintain extensive written and video blogs for their tours. Certainly it’s much easier for a fan to keep tabs on news from the band than it was a decade ago. However, the most recent period surrounding Sounds of the Universe has struggled to take advantage of what makes social media shine. Time and attention are precious commodities – content has to stand out and engage a user enough to compel him or her to share with their social network.

Simply posting news bites, links and blog articles on every social media outlet is no longer enough. Consumers and fans are more interested in the personal connections allowed by social media networks than a news-ticker approach. Depeche Mode’s team has news circulation down to a science, however they lack the personal connection – the content that makes the feed special. For simplicity, let’s take a look at Twitter (similar ideas can be applied to Facebook and MySpace). Some of Depeche Mode’s contemporaries and peers such as Nine Inch Nails, Pet Shop Boys and The Killers all use their Twitter accounts to promote news and information, but go an extra mile to make their Twitter presence engaging. These bands accomplish this in several ways: a) they post genuine day-to-day anecdotes to which people can relate, b) they share thoughts and details about the tour that only insiders would normally experience, c) they recognize the presence and importance of their fans by replying to them by reposting and highlighting fan activities. This allows fans to feel like they are reading something special and cultivates a feeling of a two-way connection and respect between fans and the bands, rather than a one-way communication model.

The existing Depeche Mode strategy has been restricted to posting release news, tour blogs, press coverage and very, very rarely an odd fan-related post. One reason could be the webmaster currently handles the official Depeche Mode Twitter account, but he is not on tour with the band. This poses a problem for casual and personal posts related to the touring entourage, as they would have to be funneled through email, defeating the purpose of the quick, instant ease of Twitter. Second, the members of Depeche Mode are shy and known for their general distaste for media chores – I imagine getting them to work TweetDeck from their iPhones would be like trying to get a cat into a bathtub. It’s a shame ’cause their natural wit and goof would make great tweets!

Literally as I was working on the initial draft of this post, tour blogger Peter announced he’d be live tweeting the Barcelona gig. TweetGeeks, rejoice! When a band can’t tweet for themselves, the next best thing is to have someone as the fan on the inside who shares his perspective with the outside world. Peter tweeted his activities, complete with relevant pictures, throughout the day. Fans were privy to slice-of-life anecdotes such as intoxicated folks sleeping on trains to pictures of the venue and the band and crew hard at work. When the gig came, we were treated to the first official live setlist relay, complete with pictures for each song. Fans have been doing these relays on forums for some time, working together to send and receive real-time texts and pictures from fans at the show as well as scouring Twitter hash tags for information on the atmosphere of the gig. However, having an official activity goes to show a bit more care and effort on behalf of the band. If the fans are going to do it anyway, why not get involved and go public? It says, “Hi, we see what you’re doing there!” Ideally it would have been best if Peter was tweeting from the Depeche Mode account, reaching their 100k+ followers instead of the couple hundred that happened to follow Peter after they saw the announcement linking his handle, but overall a great time was had by those who followed.

With a band as big as Depeche Mode, one may think that going the extra mile to really perfect a social media strategy to engage fans is not needed, but no good ever comes of complacency. Personalized approaches go a long way in the new landscape of public relations. Consumers enjoy seeing humanity they can relate to, not just newsbots. Fans want to know that their bands are aware they exist and know they are recognized as important. If a band is successful in creating unique and engaging content, fans are also more likely to forward something to their friends if they are emotionally moved by it. Whether they are amused, shocked or inspired they want to share it with the world as a must-see/read/hear experience. The more a fan talks, brags, and shares info about the band, the more their social networks (friends, family, coworkers) are aware of said band’s presence. In this way, a band’s reach extends exponentially through it’s fans and the ease of social network sharing technology with very little investment. This is especially important in areas where a band is not supported by corporate radio regulators and in an age in which music television has almost ceased to exist. Over time, fans’ sharing new content via social media means less people wondering if Depeche Mode has done much since “Words Are Very Unnecessary.”

Let’s hope that Peter’s live tweets from Barcelona are not a one-time fluke and that somebody on the Depeche Mode team has recognized what makes solid social media great social media. Yes, sir, I think I like it! 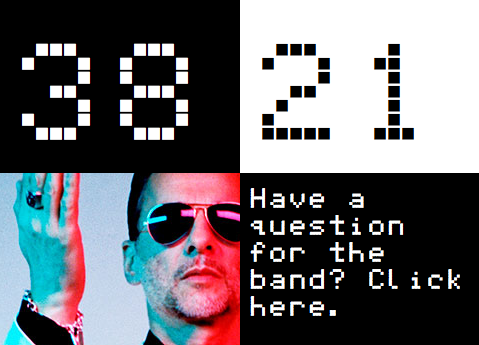